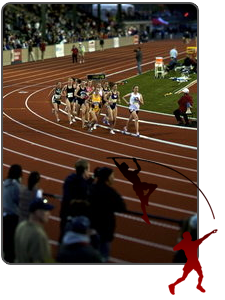 The compound effect of the little things going wrong for the track athlete, whether it's a gate issue, whether they are a throwing athlete and some type of rotational component is really compensated for, a lack of drive out of their legs and a lack of the upper torso benefiting from it. When we're dealing with track and field athletes the attention to detail is even raised and the challenge, the chess match for us, is at a much higher level. We've got to pinpoint not only the mechanical flaws in the athlete, whether they're a sprinter or a hurdler or a distance runner, but we've got to figure out how to give them the sustained strength and the central nervous system re-programming to make positive neuro-musculature coordination changes happen and that's certainly a longer project.

There are a lot of aspects to Track and Field. In running, it is important to push forward instead of pulling yourself forward. For sprinting, for example, driving through the ball of your foot with a high knee recovery in front of you so that you don't have to land on your heel and pull your body up and over yourself is tantamount. Arm action is a huge thing. Most coaches know a little bit about each little thing, but they never teach the full progression and why they are doing it. They've been told 'this is how we do something', but they don't know why they do it, and that's what we're here for. We teach you the science and the reason behind what you are doing.

At Proformance, our success with most of the Track and Field athletes has been very high because of the patience that we have. With Track and Field athletes the little, fine things, mentally down to their start, down to their thinking throughout the run, those are all things that have to be addressed so that they're think about the simple cues that are keeping the form and, again, the motor very efficient as they're carrying out their event so that, not only are they improving their times or their distances, but they're able to do it on a regular basis.

Normally you hear in the track and field world, you hear somebody nails a great time and they fall off the map for 2 or 3 or 4 weeks. If you think about it, when everything comes together for a track and field athlete, its years of training or months of training for them to pinpoint 10 seconds, 45 seconds, 2 seconds of explosive movement that must happen perfectly. Our goal is to figure out what it was they had success with, what's the issue, what's holding them back from more, and then gets them on a cycled program so that they can peak on a more consistent basis instead of fall off the map after a great run.