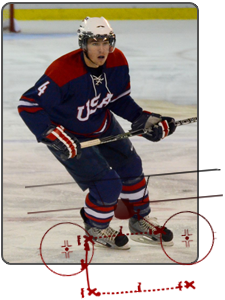 For hockey players, speed's the game. It's where the game is going. At Proformance Sports Training, the first step toward producing a complete hockey player is to assess what the missing ingredients might be. We look at their suspension (posture, hockey specific strength, ability to move explosively in every direction) and their motor to increase performance.

Once we've got the turn-over high and the efficiency high, and the suspension, the core strong enough to hold both, then we're going to look at their stick handling, their coordination, their energy systems so that now the power level that we've improved can be sustained shift after shift after shift. We also examine the athlete's mental approach to the game, both strategically and emotionally to maximize results.

While there are a number of exercises and drills that benefit all hockey players, at Proformance we further refine the workout plan by individual position. If we're dealing with an offensive player we know that we've got match their explosiveness with some type of stick handle so that they can pass by a defender. We know that if we're working with a defender, we've got to develop not only their explosiveness, but their 1st, 2nd, and 3rd gear working in reverse to be able to adjust and open up their hips to stop plays. If we're working with a goalie, we know we've got to work on some of the components that the goalie needs and that is working off their edges and lateral extensions and t-pushes to cover the mouth of the goal.